Taipei was finally hit by some sunshine and we decided to head out for a trip. Walking did not seem to be the right choice, so we went for YouBikes. Taipei’s system offering everyone to use the YouBike bicycles for a small fee. This can be paid via Easycard or your credit card. The sign up to be part of the YouBike program is fairly straight forward and also available in English. Their kiosks and stations are usually somewhere near tourist attractions, sights and MRT stations all around the city. You can also google them or download one of the many apps to locate the closest station near you starting your trip around Taipei.

The bikes we have used so far have always been in a great condition and the fee to pay is absolutely fair,

depending on the time you use the bike for. Every half hour for the first 3-4 hours is about NTD $10.  If you are not sure of how to use the bikes or rent them, the kiosk will give you written combined with picture instructions so you cannot do anything wrong, the lights will guide you as well, informing you in case a bike cannot be rented.

Once we checked the bikes, adjusted the seat in heights, we left to cycle along the Keelung River. We headed south, not sure where or when we wanted to stop again and end. We had prepared ourselves with some water and sandwiches, so we were ready to go. 🙂

We cycled some roads westwards from Mono’tel, going through the city takes a bit more time as you will have to stop at the traffic lights and be ok with driving on the road with cars, trucks and buses passing you. Be mindful and respect others in traffic, then you will be ok. 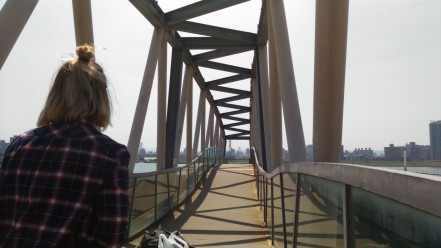 Once we made it across a bridge we were right by the river. And, suddenly the noise level from the streets and busy traffic decreased next to nothing. We were so happy as the sun slowly came out as well and we had all day ahead of us.

The paddling went on and we were amazed by how different Taipei would look from different angles we passed. Riding along the cycle path, which is incredibly 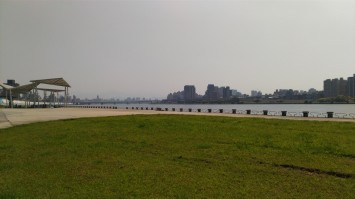 smooth and well paved, making cycling super easy, we got to enjoy the river and the city. We even saw some flying fish (?), still not 100% sure if that is what we saw, but there was definitely something jumping out of the water and back in, repeatedly. We passed gates, interesting vending machines in case you were in need for a chilled drink, and some nice shading structures providing you a resting area.

Further on, we came through little park areas, with trees hanging down, covering you almost tunnel like in a shady area that made riding even more pleasant on a hot day.

Shortly afterwards we passed an area, that seemed a bit more swamp like. We saw a 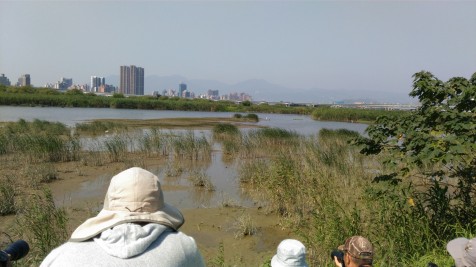 bunch of bikes piled up and people had gathered with their big cameras out pointing the same direction all together. Our curiosity led us to get closer and mingle. We saw some beautiful ibis and other typical bird for that particular area. Quite stunning, such wildlife so close to the city. We also looked around and discovered a pack of dogs, possibly stray dogs, hanging out just on the other side of the swamp. They were calm and appeared to have a good time, just like everyone else.

We went further on, making our way to the Dadaocheng Wharf. It was a busy day, so we saw a lot of families and people out on their bikes, enjoying the sun just like us. There was quite a bit to see and explore, a beautiful mural, statues and a ship construction as well. We stopped for a small break and then went further on. 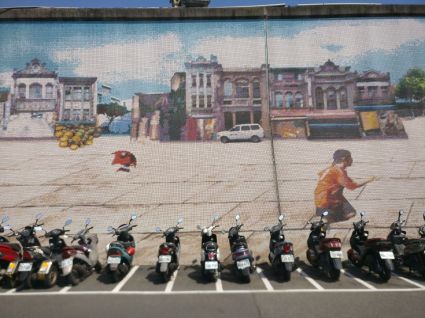 From here we eventually reached an area where flying kites seemed the most fun, so we stopped once more and watched the beautiful kites flying the blue sky, making wind crushing sounds. We stayed around for quite some time before we decided to return our bikes and slowly made our way back to Mono’tel.

It was a day full of sunshine, excerise and beautiful impressions of Taipei, that neither of us would want to miss. Enjoy your time on the two wheeler and ride around to see more!